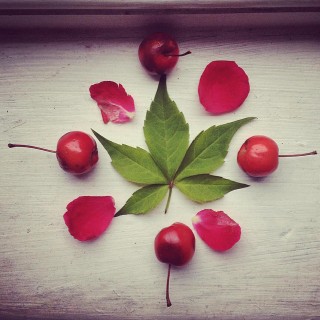 February has proved that winter is not leaving just yet. At the same time all the spring flowers like daffodils, snowdrops, crocuses have continued to flower all over gardens and parks in London. As I have mentioned in some other post I try to take part in #wildflowerhour  on Twitter every Sunday evening when people share the photos of wildflowers spotted all over UK during the last week. Here is the collection of the wildflowers seen during the whole month. The highlight is obviously a first bluebell spotted last week.

I have also visited the Royal Horticultural Society Botanical Art Show in London yesterday. So many talented painters and so many beautiful paintings. I have not taken many photos but bought this botanical illustrations of Roscoea humeana from Chelsea Physic Gardens plus some botanical postcards. The gardens are on my list to visit this spring/summer. There is also another botanical art show in London in April organised by Society of Botanical Artists which I am looking forward to.

It was a glorious sunny morning and I was humming “What a beautiful day” by the Levellers as I got up. I had to work few hours around lunchtime and while drinking coffee at the open window and listening to the birds I made a plan to cycle to the park in the afternoon to watch the sunset.

As it happens, I have finished much later than expected and hit the road around 4pm. The traffic was mad and it looked like some building must have been evacuated as there were crowds on the pavements at one of the crossroads. Hoping that was just a training procedure I pushed on the pedals. A quick pitstop at home to get the camera and back on the road again. Across the bridge I turned into park and left the city chaos behind.

The sun was still quite up so I decided to take the woodland walk and try to get some shots on the way. I walked past the Fulham Palace and stopped by the lake in the Bishop’s Park. The ducks were ashore and I gave them some of the bread I had in my rucksack. They were coming to me one by one holding their beaks up and asking for a piece. Suddenly the time stood still. I felt tranquility and calmness of the place. Although the light wasn’t particular golden yet it did feel like a golden moment when the world is tuned in to you and vice versa. This magical time when you just need to be.

My mind though was racing and obsessing about the sunset. I could not relax because I thought I have to be somewhere else. Just stick to the plan, never mind the ducks, the lake, the light, the feeling. The pot of gold is there, not here. I quickly snapped some photos away and headed back to the bridge where I assumed would be the best spot to admire the sunset.

The traffic was noisily flowing behind my back. The view was disappointing as the the sun was just about to dive behind the buildings leaving me just few precious moments to catch the last rays. It is quite a good spot for the sunset watching in summer months as the sun is further west but not so much in February which I seemed to forgot. My hasty mind.

At this point I felt I should have stayed at this calm and peaceful moment at the lake instead of chasing a damn sunset. Sometimes you just need to be where you are and appreciate what is in front of you. Relish this minute.

My another visit to Kew Royal Botanic Gardens happened on a gloomy and quite appropriately grey Ash Wednesday. To mark the end of the carnival and also to make use of my newly bought membership, I decided to immerse myself in the world of the colour and shape. As a not big fan of orchids myself, although I have never seen the native wildflower orchids, I was ready to be wowed by those exotic beauty. I might be coming back again.